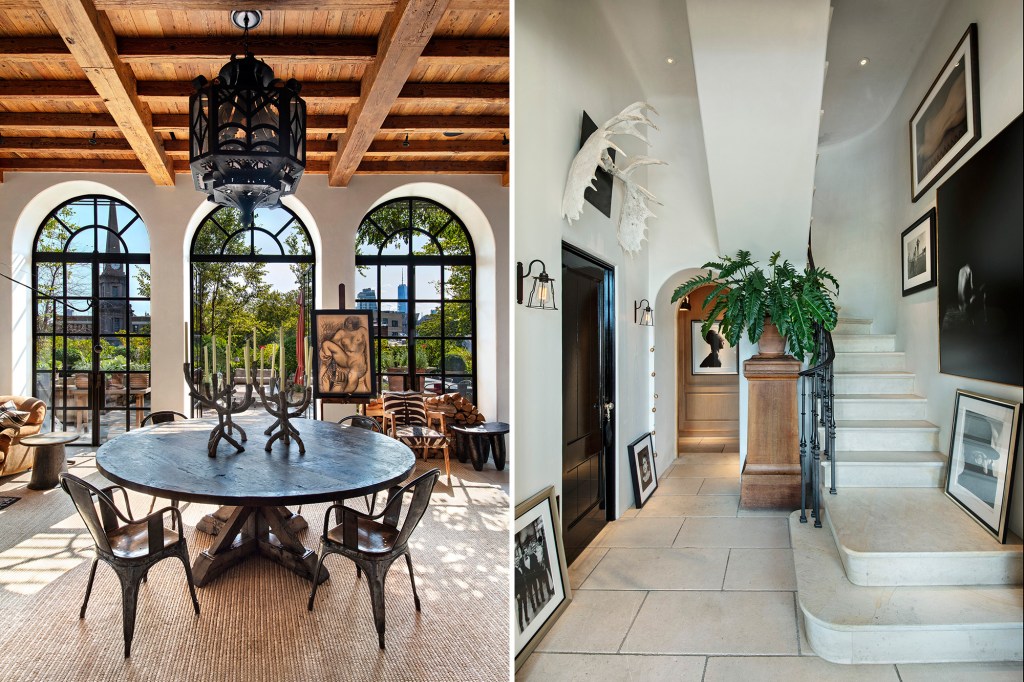 A striking East Village penthouse, one notably marked by ceilings clad in reclaimed wood, has returned to market for $8.95 million — $1 million above its asking price in September.

The two-bedroom duplex at 235 E. 11th St., which also has a 1,000-square-foot landscaped terrace off the living space, belongs to interior designer Alfredo Paredes, who spent some three decades working for Ralph Lauren.

Most recently, Paredes was the executive vice president and chief retail creative officer for the brand.

During his time there, according to 6sqft, he outfitted Polo boutiques, Midtown’s see-and-be-seen Polo Bar and even led the furniture/home lines. (He launched Alfredo Paredes Studio last year.)

That said, his home doesn’t lack any chic touches. The look is “bohemian, yet industrial,” with other details including floor-to-ceiling casement French doors and French limestone floors.

The unit has a double-height entry hall with a modern-looking staircase, a 40-by-18-foot great room with 13-foot ceilings and a woodburning fireplace, as well as a windowed kitchen. Those limestone floors? On the main level, they’re heated.

Upstairs on the second level, the master suite has a decorative fireplace and a spa-like ensuite bathroom with a soaking tub. The second bedroom also comes with its own ensuite bathroom. There’s also room for a new buyer to have a more flexible layout. The listing notes a third bedroom was incorporated into the master suite to function as a dressing room and home office. (The apartment also has a powder room.)

The listing images additionally show room for lounging and dining, built-in shelving and wood-paneled walls. The large terrace has extra room for dining and lounge furniture, and views of St. Mark’s Church in-the-Bowery.

Chris Kann, of Corcoran, has the listing.

NJ moratorium on homeowner foreclosures ends Monday. Here's what you need to know

Here are questions homeowners should ask their lender as they end forbearance and resume mortgage payments, and other tips on navigating the process.
View on Facebook
· Share