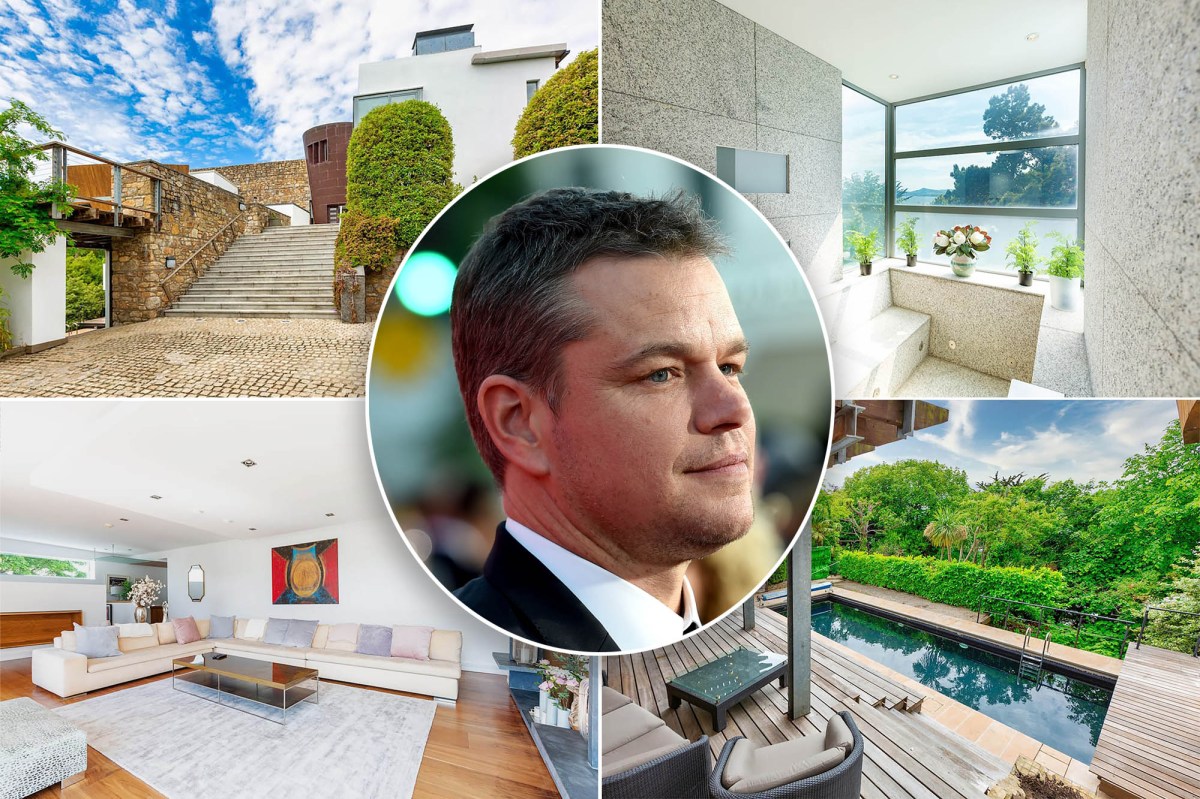 The Irish “fairy tale” house Matt Damon rented during the initial COVID-19 lockdown in March 2020 has sold for about $4.2 million.

“Ischia sold a few weeks ago. I really miss the house so much! Some great memories associated with it!” property manager Clare Connolly, who facilitated short-term rentals at the house, confirmed to The Post via email.

Damon rented the house while filming his newest movie, “The Last Duel,” outside Dublin. Filming was canceled before it began, so Damon and his family quarantined at the house for two months before returning to New York, Page Six previously reported. Damon returned to Dublin in fall 2020 to resume shooting.

“It feels like a fairy tale here,” the 50-year-old “Bourne Ultimatum” star told Dublin radio station Spin 1038 of the house in Dalkey, Ireland. “This is one of the most beautiful places we’ve ever been.”

His lockdown “fairy tale” home was built for and owned by former Ferrari Formula 1 driver Eddie Irvine in 1993, who has finally offloaded the property after two decades on and off the market, according to the Belfast Telegraph.

He got 3.5 million euros, or about $4.2 million (just over half his original asking price), for it on April 15 in an off-market deal, according to Irish property records.

The home is distinct for its copper turret and avant-garde wood panels defining the home’s exterior. The five-bedroom, five-bathroom home spans 5,000 square feet across two floors, according to the listing.

The modern Ischia house, where Damon fell in love with Ireland, sits on a hill on Sorrento Road in Dalkey, overlooking the White Rock and Killiney beaches. The home is modern yet warm due to the reddish-wood touches throughout, designed by award-winning architects Smith + Kennedy, according to a video Connolly made.

“I mean, two kilometers [from] here, there’s trees and forests and woods and oceans. I can’t think of any place else you’d rather want to be in a two-kilometer radius of,” said Damon to Spin 1038. Damon was instructed to stay within two kilometers of his residence due to novel coronavirus concerns.

The home’s stone stairs rise to a set of black double doors with glass panels. They open onto the polished wood floors of the dining room, which has a sleek straight-grained table with seating for 10, a fireplace and a stained-glass window with a modern twist — horizontal stripes, listing photos show.

The dining room leads to an eat-in kitchen with a large square island, seamless glossy white cabinets and built-in, industrial-grade appliances, according to the listing.

Upstairs is a large living room with a fireplace, a separate office and panoramic views of the sea and the mountains, according to the listing.

The home has a four-person Jacuzzi, and down a spiral staircase, a sauna and a plunge pool, according to the Irish Times. 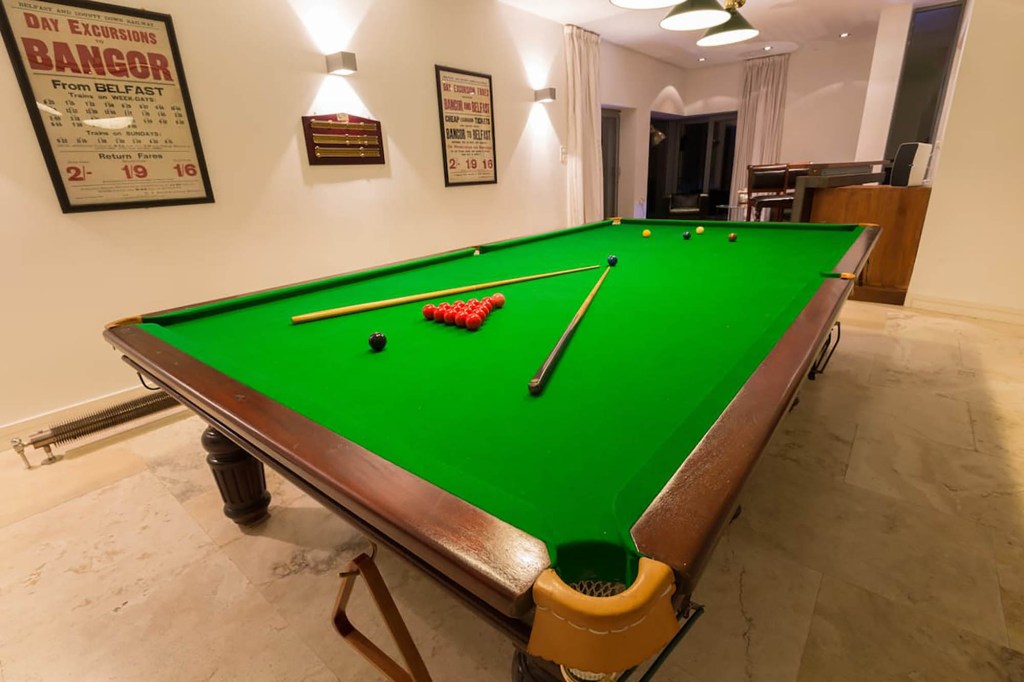 A game room with a pool table has an indoor lagoon that extends outside. 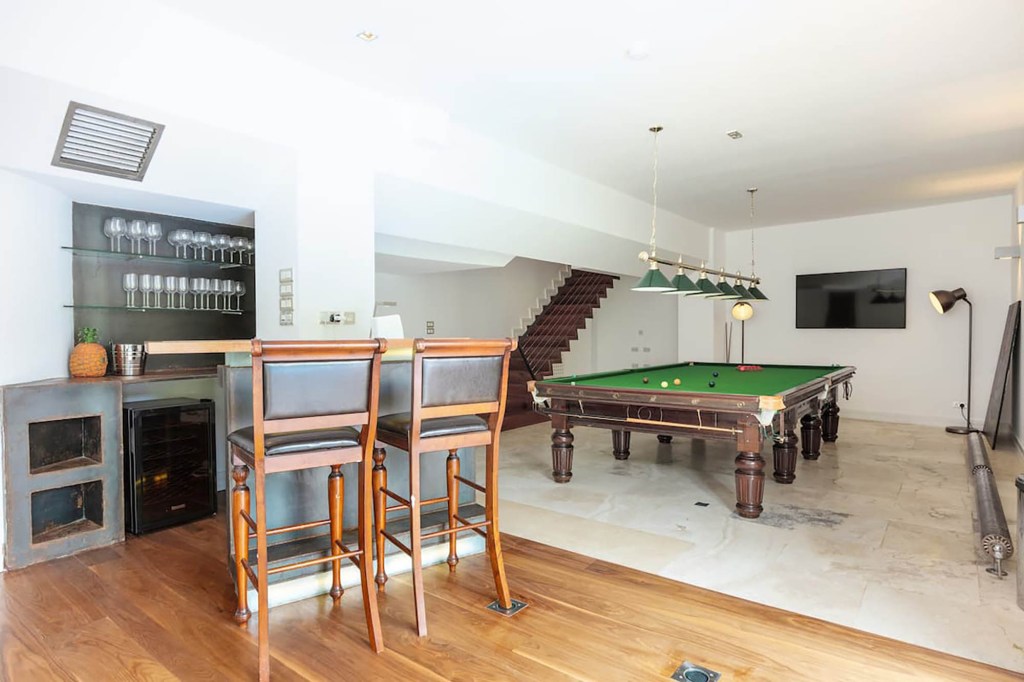 Damon’s stint in Ireland ended when his stepdaughter Alexia contracted the coronavirus at college in New York in May 2020. 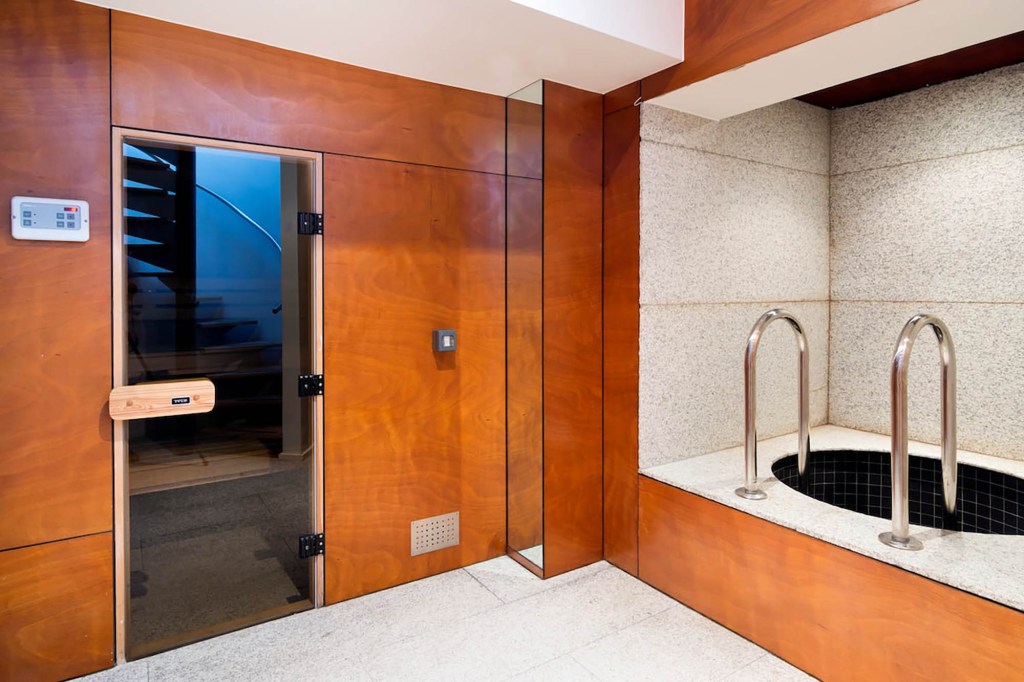 The home has a sauna and a plunge pool at the bottom of a spiral staircase. 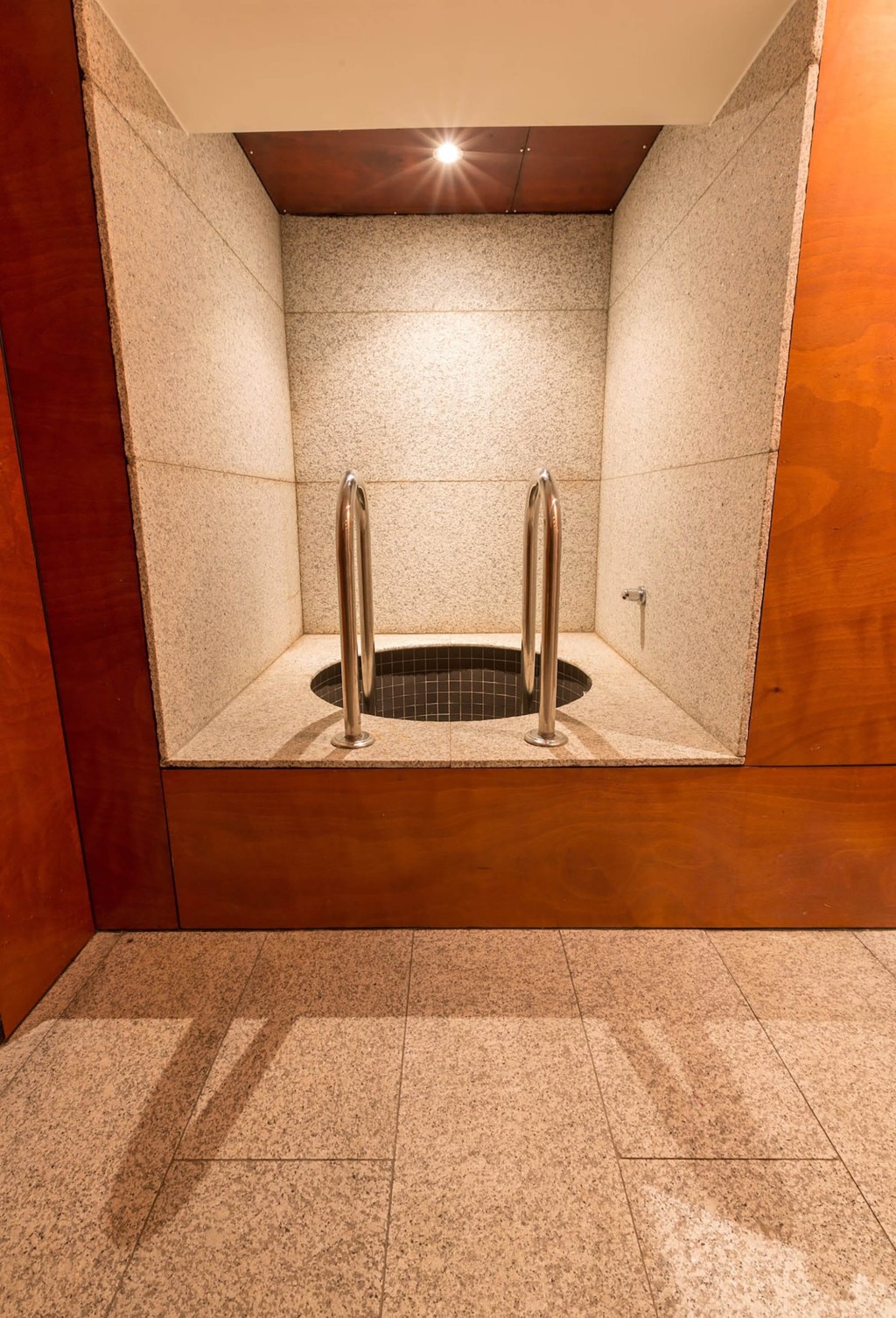 Celebrity neighbors are believed to include Belfast blues musician Van Morrison and Bono of U2.

Downstairs, a game room with a pool table has an indoor lagoon that extends outside to a lit, heated pool area. A timber deck and a bar outfit the outdoor entertaining spaces, the listing shows.

A stay at this home costs about $2,000 a night on Airbnb with a minimum stay of two nights. It is unknown whether the home will continue to be rented out under its new owner.

Celebrity neighbors are believed to include Belfast blues musician Van Morrison, as well as Bono (who spent lockdown in Italy) and Edge from Irish rock band U2, according to the Irish Times.

Damon’s spring stint in Ireland ended when his stepdaughter Alexia contracted the novel coronavirus at college in New York in May 2020, Page Six reported. He resumed filming in the fall of 2020, but reports have not confirmed whether he resumed residence in Irvine’s house.

Director Ridley Scott’s “The Last Duel,” starring Damon, Adam Driver and Jodie Comer, is slated to be released in October.

Damon — whose net worth was $55 million in 2016, the last year he made the list of Forbes’ highest paid celebrities — is most known for his “Bourne” movies, the most recent of which is 2016’s “Jason Bourne.” He has also starred in “Saving Private Ryan,” several “Oceans” movies, Marvel’s “Thor” films and “The Great Wall,” for which he briefly sported a ponytail. 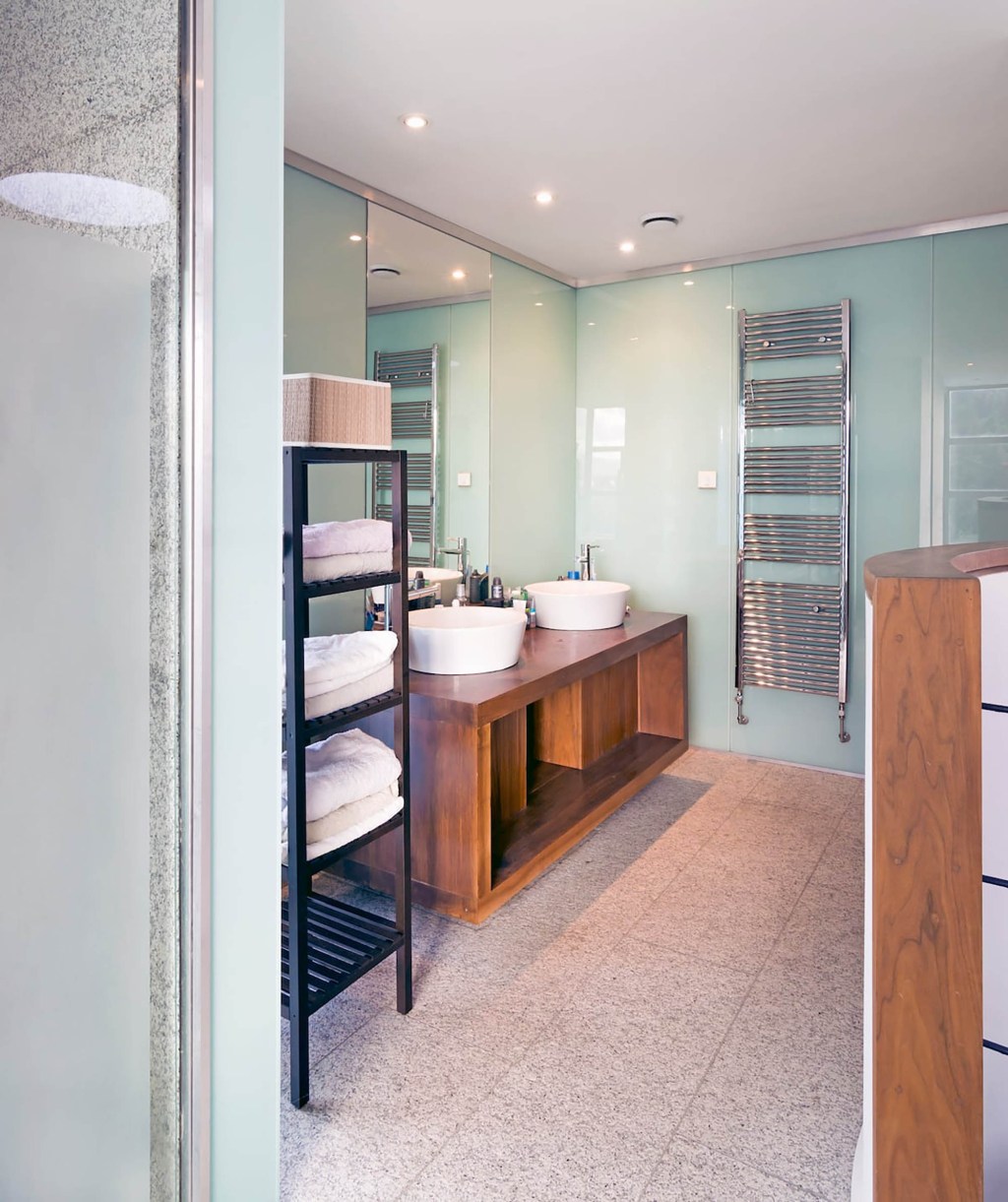 One of the home’s four en-suite bathrooms is featured in this photo. 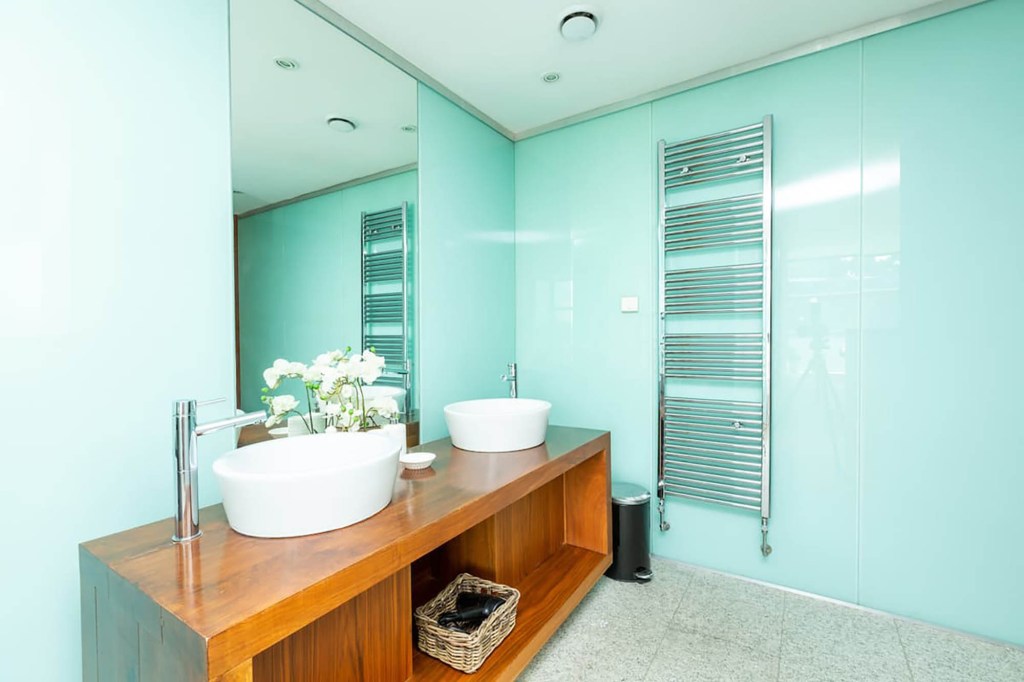 Damon is also known for his celebrity bromance with Ben Affleck (who contributed to the script of “The Last Duel” and with whom he collaborated on the Oscar-winning script for “Good Will Hunting”) and his joke-rivalry with Jimmy Kimmel, whose then-girlfriend comedian Sarah Silverman made headlines when she starred in a clip titled “I’m f – – king Matt Damon” on Kimmel’s show in 2009.

He reportedly also owns an apartment in the East Village, and he previously had homes in California and Australia.